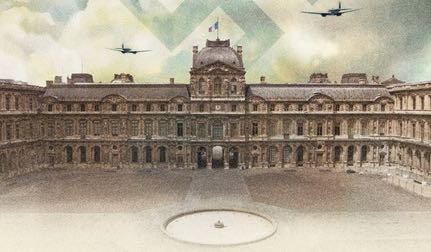 Aleksandr Sukarov uses cameras like a very smart kid playing with high-level toys. From the early scenes of the film, one of which features a great drone-shot of Paris, lifting us from street level to high above the city, the filmmaker is at play with our perceptions.

The film is about the preservation of culture: who are the heroes, who the villains, how it is accomplished, what the value of big-C culture is to a nation, or a civilization. Sukarov asks the questions in a variety of filmic techniques, and from as many angles as he can think of, tastefully restraining himself from stating the obvious, teasing us with conundrums that remain unanswerable. The film is partly a love-poem to the Louvre, which we see though several eras of its history, from many surprising angles. Our guide through the great museum is often Napoleon himself, a kind of grand guinole of a character, pointing at himself posed in a number of paintings and bragging, “that’s me!” (A claim that he even makes, in one of the film’s best jokes, about a famous picture that is distinctly NOT him.)

Napoleon also brags that many of the great monuments in the museum are there because of him, which gets at the heart of the film’s great themes: Is the piracy committed in an act of conquest a valid way to acquire works of art, even with the best curatorial motives? What is the relationship between Art and Power?

The film’s primary narrative focuses on the German occupation of Paris in 1940, when the Count Franz Wolff-Metternich became the Nazis’ chief curator and administrator of French art objects. The Occupation period is brought to life by brilliantly-chosen archival cinema footage melded with dramatic footage in which Sukarov dares to speculate on the relationship between the Duke and Jacques Jaujard, the wartime Director of the Louvre. The uneasy entente between these men is presented in two beautifully subtle performances by Benjamin Utzerath and Louis-Do de Lencquesaing.  Indeed, by the last reel, the German occupier becomes a quite sympathetic character, and his relationship with his French counterpart a small ray of sunlight in a very grey landscape.

By contrast, Sukarov invites us to consider the barbarity of Operation Barbarossa, showing us documentary images of embattled Stalingrad and Petersburg. People slog through the snow, dragging corpses past destroyed buildings whose architecture was no less beautiful than the Parisian edifices that the Nazis restrained themselves from destroying. If they were careful NOT to wreck the Louvre, they made a point of lobbing shells into the Hermitage. As a Russian, Sukarov cannot restrain himself from commenting on the distinction, but the point is not overstated. Indeed, Soviet suffering during the winters of 1942-43 could hardly be overstated.

Perhaps the most wonderful images of the monumental Paris museum come from a surprising source: paintings from the museum collection which depict the museum itself. These paintings come from a variety of periods of the Louvre’s long history, and give us a very vivid image of lives lived there: people visiting, conversing, flirting, admiring works of art, and perhaps most delightfully, painting. As the director points out in voiceover, there are a lot of paintings of women painting that are part of the collection, and Sukarov brings us close enough to these ghostly people, framing and lighting them so perfectly that we can feel their loving concentration.

At one point in this film, a gloved man stands next to one of the glass-encased mummies in the collection, and taps the glass with a finger. In the shots of the mummified figure that follow, you are very much expecting the mummy to come to life. If it does, what will it say? What message from the grave will it bring?

This is a question that rings through this film: what do we learn from the artifacts of culture lovingly preserved in such places as the Louvre? The answer seems clear: we learn what it is to be human. And Sukarov’s playful, passionate film tells us that this is exactly why the existence of such thing as an Empire can only be justified by its respect for such inquiry.